You are here: Home / Tech / Jump by Native Union 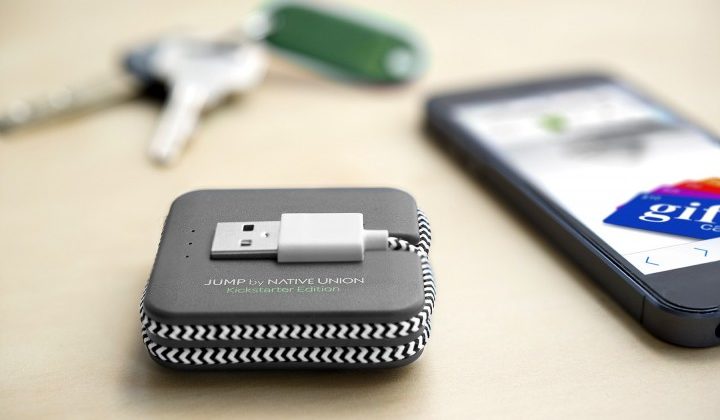 Being as connected as we are, the night time ritual of plugging in your phone seems like the only sure way to make sure you get enough charge to get you through the day. If forgotten, watching your battery drain away can be like eating your last meal before heading to the gallows.

This is where ‘Jump’ by native union comes in, this 2″ x 2″ cube is more than just an extra battery. It’s as though the designers acknowledged that giant portable batteries are not only too cumbersome, but also require the same ritual of remembering to plug them in. Weighing a mere 1.48oz (42grams) the ingenuity of the device lies not in it’s ability to hold phone saving power, but in it’s unique power-through cabling. The battery itself holds 2.5 hours of talktime, but when you do find a usb power source it can be plugged in while charging your battery simultaneously.  Essentially it’s a charging cable that also happens to store some of that charge for later.

Good Design Winner for 2014, Jump’s inlaid edging allows it’s 19″ of cabling to wrap neatly around itself and the metal connectors lie flat against it’s face, keeping it’s footprint unbelievably small. Available in both lightning and micro usb, and the cord detailing comes in red, blue and zag.

I personally carry one in the coins pocket of my jeans, and I honestly don’t notice it until my battery indicator flashes at me. The extra 30% I get out of it is usually all that I need to keep my phone alive until I get back to my computer / work / home.